The Beau and the Beast 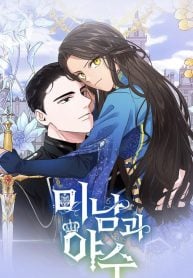 The Beau and the Beast

“Am I really… a beast?”
Lee Hanbyul, a university student born with only a dirt spoon in her mouth, opens her eyes to a hardcore transmigration life!
After meeting her tragic end in a car accident, she wakes up in the body of “Alexa,” the second princess of the kingdom of Felipe. However, she doesn’t look like a normal person, but like a furry beast…
Not only does she have to juggle getting rid of her beastly appearance with getting close to Verkyllon, the Grand Duke of the Veiled Kingdom, but she also has to keep the families and nobility that are after her for revenge in check.
This is a comical story about Alexa, the second princess of the kingdom of Felipe’s relentless pursuit of revenge.

The Wicked Wife of a Scheming CEO

A Happy Ending for Villains

Shadow Paradox: The Incapable to Possess You

The Heroine Wants Me As Her Sister-in-Law

The Evil Girl Makes Her Debut In a Glamorously